Stacked STL lives in an area that represents the truest duality of man. The restaurant itself is setup nicely on the side of a street opposite some lovely shrubs, a fountain, and a statue of… someone. The surrounding houses are slightly worse for wear with more furniture on the lawn than in the den. Of course, this doesn’t come from a place of judgement and rather one of awe.

Stepping inside Stacked doesn’t betray this feeling either, as looking at the decor and overall setup allows thoughts to flood your mind as you attempt to piece together what it is you’re looking at. In lieu of a theme or gimmick, Stacked has a random assortment of ideas that make up its make-up. Excellently hand-painted pictures of farm animals hang on some of the walls. The tables are topped with literal door panel long pressed between panes of glass. The chairs are honestly terrible, though. Much to small for the average person to sit, and really could only be comfortable to an individual the size of a Smurf or a… sea Smurf. The ones with the straws on their heads? Uh… SNORK! Snork size, we’ll say. So, I guess they sort of do have a schtick: homemade and crafted, possibly even with some help from the community. I’m not sure if the person who painted those animals works at Stacked or is merely a nearby resident, but regardless it does add to the charm. 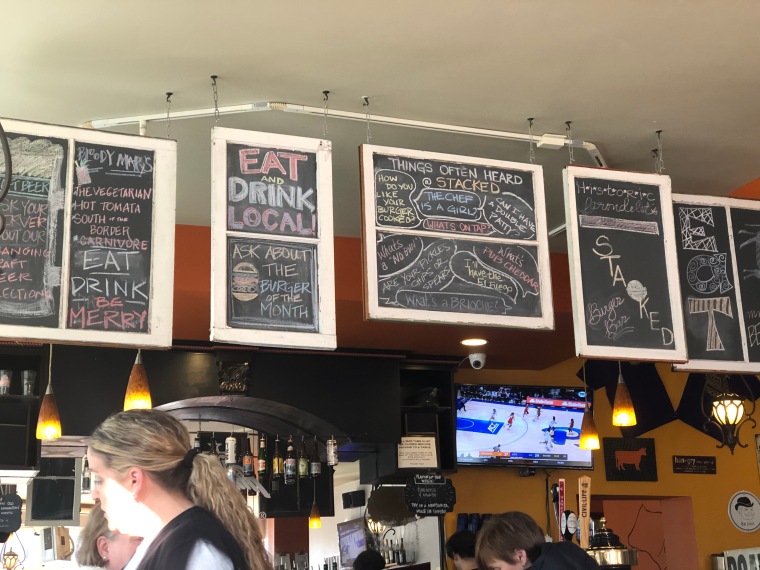 A bar is also present fully stocked with a tremendous amount of alcohol and a variety of chalkboard signs hanging above it, dictating various types of special and menu items, as well as a sort of FAQ with things that are commonly asked at Stacked. Unfortunately, none of the answers to these questions are written on the board, so it’s kind of mocking anyone that asks those questions by teasing them with the possibility of an answer. This is something that I greatly enjoy.
The strangest aspect of the place that I can think of is that our initially placement was at a table stationed right in front of the door. And when I say in front, I mean directly in front of the door to open, as there is no lobby to this establishment. And with the current temperature and windy conditions that come with the winter season, we almost immediately asked if we could move to another table, as there were plenty open. And granted, they obliged quickly. However the next individuals to come in once that table was open we’re also seated in front of the door. I don’t recall whether or not they ended up staying. Was this a game? Was there a pool in the back of the restaurant for how long any given party could withstand the numbing cold of their front entrance? Did they laugh? I can only hope.
But now, of course, the most important part of Stacked: how was the food? I didn’t go for the ambiance, as appealing as all of the crazy crap littering the walls was. We go to these restaurants because we want to eat. That’s why there aren’t scary singing animatronic mice and filthy play-pits at the Olive Garden. Though, that being said, we certainly going to the Olive Garden for the food, so maybe those things could only help.

Anyhow, we’ll start off the food talk with the appetizer we had brought in. These being 4 pretzel sticks and two types of dipping sauce: beer cheese and spicy beer mustard. Now, I’m not a big pretzel fan, I just see it as bread and salt, and while both of those things are nothing to scoff at what’s stopping me from dumping salt into a bag of Wonder Bread and shaking it up? Jests aside, that’s where the dipping sauces come in, as they can always be used to improve the situation. The cheese there isn’t much to say about. I love cheese of most every kind, and the beer cheese given to me did it’s job well enough. The mustard was another story. I both loved and loathed simultaneously, as the spice provided was welcomed heartily. However, the aftertaste and reintroduction of the spice in my throat nearly choked me twice. Perhaps I had too much, but I couldn’t just let it sit there unconsumed. I knew you’d understand.

The burger itself was something special, as I was directly responsible for its creation. You see, you can get a sandwich that they have listed in their menu already predetermined OR you could construct your own burger from the ground beef up. It’s like Build-a-Bear with all of the trimmings and none of the stuffings. I took it upon myself to take my favorite elements of every sandwich and put them together, while still making it unique enough to make building my own worthwhile. Most have ketchup and mustard, so I used BBQ. I added two of my favorite cheeses, Pepperjack for a peppery flavor and Cheddar for a cheddary flavor. I put it on a between two pieces of Texas Toast (which honestly is just garlic bread without the garlic, come on), and I added both pickles and fried pickles. And all was good. It was tasty, and this is one of those restaurants that gives you a lot of burger when you order it. Given the pre-meal pretzels, I was worried I wouldn’t finish it, but it was so good that perhaps I ate more than I should’ve at the moment and I did end up finishing it. Truly, it was a great burger, and I got to have a hand it’s inception so is there really anything else I could’ve asked for? Well, a lot according to the sheet, but I’ll save that for another day. Mom’s meal here…

I loved the fact that you can build your own burger. I chose a pretzel bun (no surprise to those that know me), with lettuce, pub cheddar, bbq sauce and crispy onions. I also had french fries for my side. This burger, while simple considering all the topping choices, was soooo good! The beef had a great flavor, the pretzel bun was just about perfect (IMO), and for me anything with crispy onions AND bbq sauce is a win! The french fries were good. I added salt and ketchup, but no funky after taste or taste of stale cooking oil. I will definitely go back to Stacked STL. The only thing better than the burger was the company I was with ! Cheesy I know… but true!

Until next time, lovelies! 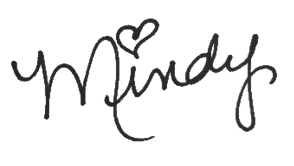